Probably my favourite grind band ever. Bassist Mark Harvey interviewed via email during Sept. '03 and originally published in Perro Maldito#3.

Perro: Around mid '95 Warsore starded to exist. You told me at first you weren't a serious band. How did the whole thing started to become serious?
Mark: W@rsore started as just crazy noise but still had the swedish HC influence and we had some different members......it was fun for a while then we got bored so we got better at playing our instruments ...and more serious about starting a real band because we wanted to play brutal fast music that would totally blow people away not just making noise and people would laugh at us!!! hahaha and they thought we were just crap!!!!! So we started to practice and write real songs .....we were listening to shit like Sore Throat and Arsedestroyer which was still noise but real songs......and i love stuff like 7MON and Anal Cunt!!!!

Perro: Warsore was a grind band with deep punk/hc roots but I've always got the impression that you were more popular in the gore/ metal side of the grindcore coin. How could you explain that? I mean, you were around when the whole powerviolence thing was big and grind was pretty popular in HC...
Mark: I think W@rsore was just too brutal for normal punx!!!and most gore/death heads didnt think that punx could be so brutal!!!!hahaha....we were always friends with and played shows with lotsa punx like Stand Against and Drunkard!!....But i think there is always too much emphasis on the catagories...people should be more open minded and not only listen to one "type" of music.....and if a band doesnt fit in any catagory -it sometimes gets labelled as something its not.......but i like the fact that different people can get into W@rsore... 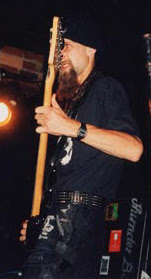 Perro: Talking about your huge discography, which is, in your opinion, the best W. material and why?
Mark: The W@rsore "Brutal Reprisal" 7" which has just been released is our most brutal release ever!!!! I think its gonna make your head fucking explode???!!!! It was our last ever recording in Oct 2000--it also had our new vocals Bo....maybe vocals are a bit different but still sounds brutal???

Perro: And the worst one?
Mark: Im not so sure about the W@rsore/Egrogsid split 7"--it is a really bad press--only 100 made on clear vinyl....sounds very bad and there is an echo after every song finishes but its still cool......
we relesed it ourselves on our own label called Violent Swing Records...it is now very hard to find!!!!

Perro: Warsore toured Singapore and Malaysia with Demisor and Japan with Gore Beyond Necropsy. Is there any funny or scary story? We want dectails!!!
Mark: We had the best fun touring with those bands..they were so much fun!!!! Demisor are really cool guys and just want to drink and hang out... Singapore has a really good grind/crust scene and they are kind of poor and they showed really great spirit!!!!!there were lots of great bands !!!
Demisor are fucking brutal band and there was supposed to be a W@rsore/Demisor split 7" but it never happened!!!
Japan is a fucking crazy place and GBN are totally fucking crazy guys!!!!...lots of drinking and soo much laughter you start to cry!!!hahaha...they just laugh all the time!!!!we stayed at their house and their mother cooks nice food for us and we get really drunk always!!!!they drove us around in their van and they always get lost!!!!haha its very funny! They showed us all around Japan to see the sights....we went to a Japanese theme park and it had a haunted hospital---that was crazy fun!!!!!!
and we got to play with lots of cool japanese bands!!!!...both of these tours would not have been possible if not for Demisor and GoreBeyondNecropsy--so huge thanks to them for everything they did for us!!!!!!

Perro: I remember you were planning a tour in europe around '00 and there was an upcoming full lenght album, too. Both never saw the light. Why?
Mark: We really wanted to come to Europe -- a guy in Germany i think made lots of promises -then nothing happened...the same guy also talked about doing the CD....i guess some things dont always work out the way you would like them too.....but i would have loved to come to Europe!!!!i think it was quite well known that we were supposed to come too and i just want people to know it wasnt our fault -we were trying really hard to organise it...and i was sad when it didnt happen.

Perro: All things come to an end: what made you decide to quit the band?
Mark: First Den (vocals) got kicked out and we got new vocalist Bo-we played a few more shows and recorded the "Brutal Reprisal" 7" ...then Erik (drums) got married and moved to Japan (he also did all of W@rsore live sound and studio recordings)....and also Paul (guitar) got married and moved to US ...so i never wanted to quite the band--i was trying very hard to keep the band together and i was extremely pissed off when Erik and Paul moved away!!!!!!

Perro: What are now doing all the persons involved in the band? Is there someone still involved in the grind/hc scene?
Mark: Well...Erik and Paul are just living the married life i guess but they are still into grind/HC i think?...sometimes i do a noiseshitcore band called Faecal Fork.....really just a joke band and we just make fun of people and other noise bands!!!!!hahaha but its really crap sound --nothing like W@rsore!!!!!!we released demo #1,split tape w/ Sonic Disorder and split tape w/ Tapasya.....
and yeah i still really love the grind/HC scene althought its so hard to keep up with all the new bands these days...but i still love old HC/punk/grind/metal/thrash......and i spend most of time collecting rare records--anyone interested in trading please get in touch!!!! but i will be
fucking Hardcore until i die!!!!

Perro: When looking back at that period, do you have any regrets?
Mark: NO - I dont regret it at all...i only regret that W@rsore slit up....i had the best time of my life playing in W@rsore!!!!!...I never did it to get famous or make money-i did it because i loved doing it .....the feeling when your playing live is a fucking awesome rush for me....

Perro: When you started in the mid '90s the scene was pretty different: there wasn't internet and all the demo were on tape, not cdr. Do you think the whole thing is better now or back in the day?
Mark: I guess im kinda stuck back in the old days...i’ve always loved demotapes and tape trading......but now for me is just not the same!~!!!but i think it is a much better way to get your music heard by lots of people- and of course its just the way of the future!!!!also i love videos and video trading and now everybody wants DVDs!!!!and i still think vinyl is better than CDS in my opinion!!!!.....but for sure the internet and emails is a much better way to keep in contact with friends than writing letters!!!!so i guess im just trying to keep the old spirit alive!!!!!! 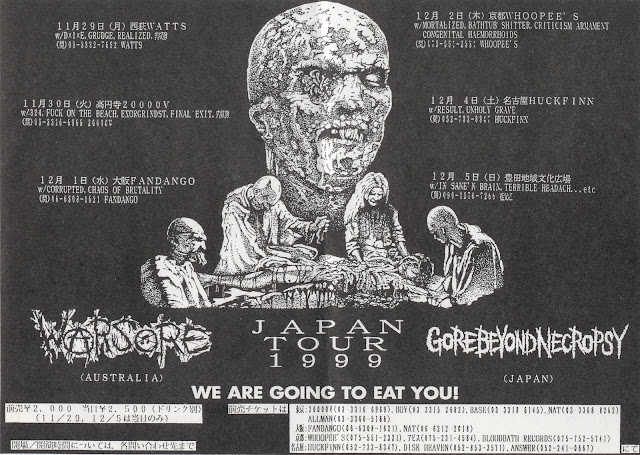 Perro: Will you ever bring Warsore back to life if you'll have the possibility?
Mark: I would love to bring W@rsore back to life but maybe it will be impossble as other members have moved so far away......but i guess it still kinda feels like W@rsore is still alive because there is still some releases coming out!!!!!

Perro: Ok, it's time to conclude. Thanks for your time! Feel free to let us know something more about the upcoming stuff that's going to be released.
Mark: Watch out for the W@rsore "Brutal Reprisal" 7" and the "Reopened Wound" CD...and also there will be some W@rsore discography CDS too!!!! so people will finally be able to hear rare stuff like the W@Rsore/Egrogsid split 7"......I just wanna say horrendous mega ultra thanks to all friends-old and new for the friendship and support!!!!and also a huge thanks to you Rafael for asking W@rsore to do this cool interview-your interest is very much appreciated!!!!
keep the true HC/punk spirit alive!!!! be true to yourself and others in your scene-unite and do something positive!!!and fucking kill rip off bastards!!!!
I hope in Italy you will stay true fucking grindcore maniacs forever!!!! Stay drunk and bong on.....Cheers friends.....Mark

Perro
Scans of interviews from my old zines and others, too. Plus broken english record review.